It’s amazing how things turn out and prevent people from being prejudiced. The Killer in Orlando shooting was a 2nd generation Afghan-American, and now the savior of potentially thousands of people is also an Afghan-American. 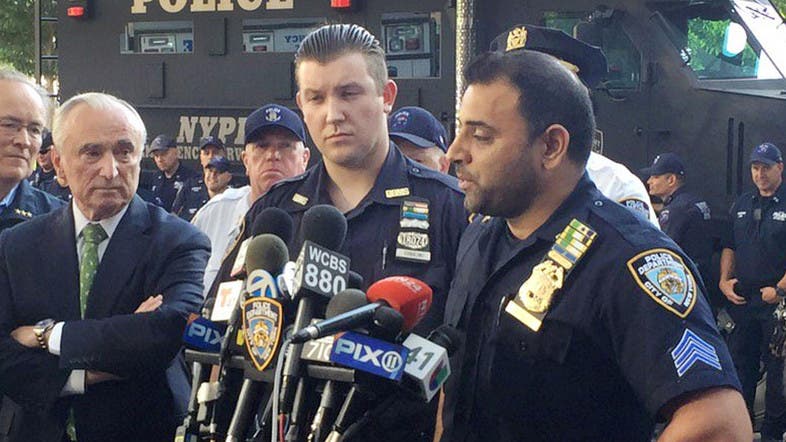 Sgt. Hameed Armani, right, and Officer Peter Cybulski talk at a news conference, Thursday, July 21, 2016 at Columbus Circle in New York, about the hoax bomb that was tossed into their police van the night before in Times Square. (NYPD via AP )
Courtesy: Al-Arabiya

When a passing driver hurled a flashing, clicking object into their police van in Times Square, it looked like danger to Sgt. Hameed Armani and Officer Peter Cybulski.

“Boss, this is a bomb,” Cybulski said.

But rather than run to safety, Armani hit the gas, determined to get the device away from the crowds.

“We’re gonna go, but I’m not going to have anybody else go with us,” he thought.

The partners were hailed for their quick-thinking courage Thursday after the dramatic episode, which evolved into an overnight police standoff with the man suspected of tossing the object, later revealed to be a harmless fake.

Armani and Cybulski “put their own lives at risk so that they could save potentially hundreds, if not thousands, of people in Times Square,” Police Commissioner William Bratton said, calling them “heroes of this city.”

The driver, whom police identified as Hector Meneses, 52, was taken to a hospital for evaluation. Calls to possible phone numbers for him and relatives weren’t immediately returned. It wasn’t clear whether he had a lawyer who could comment about the incident.

The bomb hoax in one of the world’s top terror targets came at a tense time for police and communities nationwide, amid anger and anxiety over police killing civilians, gunmen killing police and recent attacks by extremists in Orlando, Florida, and Europe.

Armani and Cybulski were in a marked, parked police van down the block from the theater showing the hit musical “Hamilton,” when an SUV slowly rolled by. Security-camera video shows the driver throwing something into the officers’ open passenger-side window.

Armani turned on the lights and sirens, and the officers headed away from the square, praying, said the sergeant, who’s Muslim; his partner is Catholic. Armani, an Afghan immigrant, joined the New York Police Department 10 years ago. Cybulski became an officer three years ago after two years in a police cadet program.

“We thought, ‘This is it. We’re not going to make it … but I’m happy nobody else is going to get hurt,’” Armani said.

They drove a block and a half to a less crowded spot, then got the device out of the van. It turned out to contain a red candle, two solar-powered garden lights, a T-shirt and tin foil, said William Aubry, the chief of Manhattan detectives.

After officers stopped the SUV, Meneses barricaded himself in it, told them he wanted to die and had a bomb strapped to an industrial-style vest he was wearing, Aubry said.

Police used a robot to scan his vehicle, and hostage negotiators tried to talk with him over the next roughly six hours, with Meneses donning a red construction helmet and holding a household remote-control device as if poised to use it to detonate something, Aubry and Chief of Department James O’Neill said.

Ultimately, SWAT officers closed in, pepper-sprayed Meneses and pulled him from the SUV, which was packed with 19 more garden lights and a capped pot with wires coming out, seemingly meant to simulate a pressure cooker bomb, officials said.

Originally from Colombia, Meneses lives in Queens, where neighbors told police he’s prone to buttonholing people about community issues and can be irascible, Aubry said.

Meneses applied in April for a taxi driver’s license but hasn’t gotten it, the city Taxi and Limousine Commission said.

The officers, meanwhile, said they just did the jobs they’re trained to do.

“We come to work every day not knowing, quite literally, what might be thrown at us,” Cybulski said.