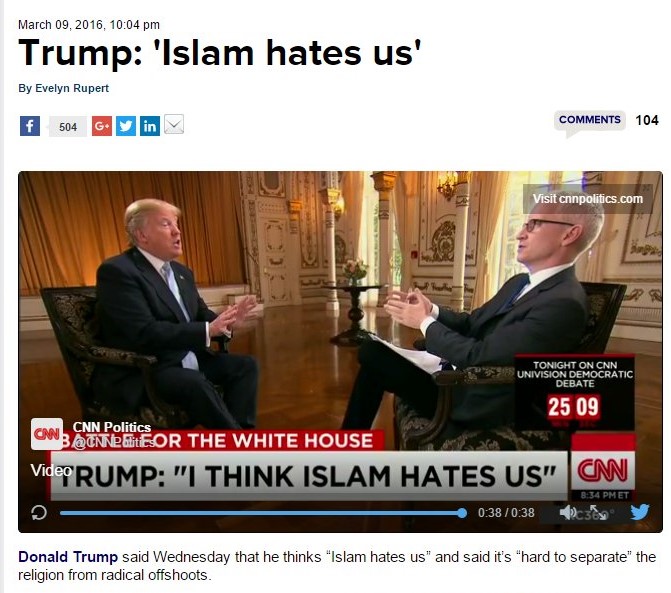 Washington, D.C.  March 10, 2016 –Donald J. Trump, a leading contender in the Republican primaries was interviewed by CNN Anchor Anderson Cooper on Wednesday, March 9, 2016. During the interview Mr. Trump made comments about Muslims and Islam that we find extremely misguided, egregious, and divisive.

Mr. Trump said, “Islam hates us.”  Nothing could be farther from the truth.  Islam is not an individual or a being to hate someone. Unfortunately, there are a few in every faith who are misguided and act on their own.  As a society we blame those individuals for their crimes and punish them accordingly.  Criminals are individually responsible for their acts and no one but them should be held accountable.

As patriotic Americans we at the American Muslim Institution (AMI) take strong exception to Mr. Trump’s continued demonization of our faith and all who follow the faith of Islam. We hope Mr. Trump will reconsider his stance and his tone, and seek knowledge about the faith of Islam so he may speak to current issues with a level of truth. A person aspiring to be the leader of our great nation needs to be fair minded and better informed than Mr. Trump, at least when it comes to matters of religion.

We at AMI stand ready to meet with Mr. Trump and share with him facts about Muslims and Islam, including their extensive positive contribution to the United States of America.”