It was a joy to see a Muslim organization conduct a poll, and present the data out to the public.  There were a few surprises in it,  like Muslims are more optimistic than the general population about future of America,  and a much lower percentage of Muslims wanted religion in politics compared to the Protestant and Catholics.  What was commonly believed was reflected as well, and that is Muslims and Jews lean towards the Democratic Party,  and Muslims mirror the Protestants in religiosity, meaning frequenting the place of their worship.  Above all nearly 40% of Muslims are politically independent.  While security was number #1 priority to fellow Americans, economy was #1 priority for Muslims. Muslims are patriotic Americans indeed.

There was a question from the audience about Muslim icons, and of course Muhammad Ali tops the list.  Out in the lobby, Dalia Mogahed, the research director and I were talking about the statistics.  Out of appreciation for her pioneering work,  I mentioned that she becomes a Muslim American Icon for her research work, no one has done this before.  Until now, most of the conversation in Public Square was based on observations and hearsay, and now, for the first time, it is based on empirical data.

I compare her to another Muslim Icon from India,  who was the first Muslim to produce extensive socio-economic data about Indian Muslims and his report, the Sachar report is the basis for any conversations about Muslims in India.

I believe they will have the full information and presentation on their website www.Ipsu.org soon. This narrative and data needs to be shared widely as it will mitigate the perceived conflicts and nurtures goodwill in building a cohesive America. Indeed, Muslim Americans are no different than fellow Americans.  I urge fellow Muslims to take this up and share it with fellow Americans in the interfaith and civic groups, the more we learn about each other, the fewer the conflicts would be. 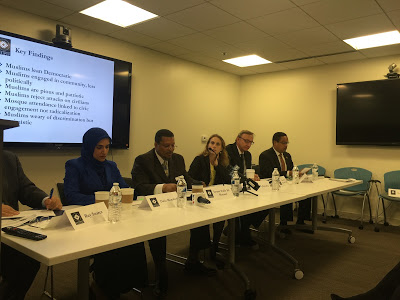 Panelist: Imam Talib M. Shareef. President and Imam, Nation’s Mosque, Masjid Muhammad
The following was part of the material distributed about the program. “In the face of rising anti-Muslim rhetoric, prejudice, and fear, ISPU’s groundbreaking poll amplifies the voices of American Muslims and sheds light on their opinions and policy priorities in the upcoming election cycle.  This comprehensive representative poll also includes the voices of Jewish Americans and other faith groups, in addition to the general public on nationwide hot topics and civic engagement patterns. The findings of this work will enhance an educated citizenry, so vital to our democracy.”

AMI is committed to be a proactive voice for American Muslims, and our actions, writings and talks are geared to achieve the ultimate goal;  where fellow “Americans  will see Muslims as their neighbors and fellow citizens, committed to fighting against violent extremism and protecting the homeland. ” Our vision is “An America in which all religious and ethnic communities contribute to her success while living in peace and harmony, free from prejudice and discrimination.”

Please join us for another event where the survey is produced by the Evangelical group, what they think of Muslims and what can we do about it.

State of Muslims and what can we do about it?