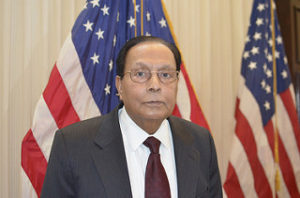 Dr. Aquilur Rahman is one of the founders of the Montgomery County Muslim Council and the Montgomery County Muslim Foundation in Maryland, and served as Chairman of the Boards of Directors of those organizations for four years. He is deeply involved in various civic, humanitarian and grass roots political activities.  In addition he supports many NGO’s which are engaged in philanthropic work in Pakistan as well as in America. He established a Trust Fund with other friends at the University of Karachi Alumni Association which has now raised over $1 million and distributes at least 250 scholarships per year to students at various academic institutions in Karachi, Pakistan.

He strongly supports those organizations which are working to raise Muslim-Americans’ awareness and helping them to find their legitimate place in their adopted country. In the political arena, he is highly involved with local Maryland and Federal elected officials.

Thereafter he joined the National Institute of Health in Bethedsa, MD, and then moved to Georgetown University, Lombardi Cancer Center in Washington, D.C., as Associate Professor. He has been deeply involved in innovative works in the area of cancer therapeutics. He has been involved in the development of a number of drugs took quite a few drugs in the clinic as new therapies for cancer patients. He holds more than 16 patents covering a wide range of cancer therapeutic.

Dr. Rahman founded a publicly-traded biotech company, NeoPharm Inc., in 1996. He served as Chief Scientific Officer, and a member of the Board of Directors. In his capacity as Chief Scientific Officer, he took multiple drugs to the clinic for cancer therapy and contributed greatly to the company’s success.  Currently, he serves as the President and CEO of N&N Pharmaceutical Inc., a company developing novel antiviral agents for infectious diseases.

Dr. Rahman lives in Potomac, MD, with his wife, Rukhsana. They have one daughter and one son and a grandchild.