Mr. Trump assumed that Muslim women are oppressed and yield to their husbands and don’t have a voice of their own.  This is indeed how Muslim women are “perceived” and Trump jumped the gun and questioned Ghazala Khan, why she did not speak? Little did he know it will back fire.

Now, the more the Pied Piper Trump criticizes, the more he is digging his own grave.

Ghazala Khan responded exceptionally well, and said, “If he studied the real Islam and Koran, all the ideas he gets from terrorists would change, because terrorism is a different religion.” 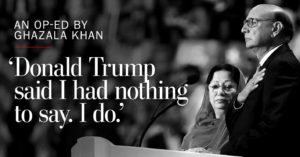 Donald Trump got the Republicans to fall in line, including the free thinking Ayn Rand follower Paul Ryan and he assumed Muslim men are like that.  Indeed, the misogynist knew little that a majority of Muslim families respect each other’s spouses equally. The misogyny runs in all races, nations and religions – a percent of men are same no matter what faith they belong to, but in general people are good.  I guess freedom is anathema to the conservatives while conformity is cherished.
This is an abstract from my sermon from the interfaith marriages.

It means that husband and wife need mutual support, mutual comfort, and mutual protection. It is also a reference to the fact that spouses are each other’s sanctuary insofar as each covers the others’ shortcomings and preserves his or her privacy; hence the tranquility and harmony.

In Islam, Men and women are deemed full and equitable partners of each other. Love, tranquility, mercy, equity, and kindness are the hallmarks of an ideal marriage.

Indeed, in general God has created all species in pairs and has made one for the other, and when that union takes place, God is the happiest. God is about harmony, and marriage is a step to bring harmony between two people and some even consider it is a form of worship.

Once you enjoy the harmony and connection between the two, when you feel each other’s joy, each other’s pain and apprehension… neither of you feels alone…

Indeed, when husband and wife are connected, they speak for each other, and that’s what Khizr Khan did, spoke for Ghazala. Donald Trump has asked why I did not speak at the Democratic convention. He said he would like to hear from me. Here is my answer to Donald Trump: Because without saying a thing, all the world, all America, felt my pain. I am a Gold Star mother. Whoever saw me felt me in their heart.

Donald Trump said I had nothing to say. I do. My son Humayun Khan, an Army captain, died 12 years ago in Iraq. He loved America, where we moved when he was 2 years old. He had volunteered to help his country, signing up for the ROTC at the University of Virginia. This was before the attack of Sept. 11, 2001. He didn’t have to do this, but he wanted to.

When Humayun was sent to Iraq, my husband and I worried about his safety. I had already been through one war, in Pakistan in 1965, when I was just a high school student. So I was very scared. You can sacrifice yourself, but you cannot take it that your kids will do this.

We asked if there was some way he could not go, because he had already done his service. He said it was his duty. I cannot forget when he was going to the plane, and he looked back at me. He was happy, and giving me strength: “Don’t worry, Mom. Everything will be all right.”

The last time I spoke to my son was on Mother’s Day 2004. We had asked him to call us collect whenever he could. I begged him to be safe. I asked him to stay back, and not to go running around trying to become a hero, because I knew he would do something like that.

He said, “Mom, these are my soldiers, these are my people. I have to take care of them.” He was killed by a car bomber outside the gates of his base. He died trying to save his soldiers and innocent civilians.

That is my son. Humayun was always dependable. If I was vacuuming the house and he was home, he would take the vacuum from my hand and clean the house. He volunteered to teach disabled children in the hospital how to swim. He said, “I love when they have a little bit of progress and their faces, they light up. At least they are that much happy.” He wanted to be a lawyer, like his father, to help people.

Humayun is my middle son, and the others are doing so well, but every day I feel the pain of his loss. It has been 12 years, but you know hearts of pain can never heal as long as we live. Just talking about it is hard for me all the time. Every day, whenever I pray, I have to pray for him, and I cry. The place that emptied will always be empty.

I cannot walk into a room with pictures of Humayun. For all these years, I haven’t been able to clean the closet where his things are — I had to ask my daughter-in-law to do it. Walking onto the convention stage, with a huge picture of my son behind me, I could hardly control myself. What mother could? Donald Trump has children whom he loves. Does he really need to wonder why I did not speak?

Donald Trump said that maybe I wasn’t allowed to say anything. That is not true. My husband asked me if I wanted to speak, but I told him I could not. My religion teaches me that all human beings are equal in God’s eyes. Husband and wife are part of each other; you should love and respect each other so you can take care of the family.

When Donald Trump is talking about Islam, he is ignorant. If he studied the real Islam and Koran, all the ideas he gets from terrorists would change, because terrorism is a different religion.

Donald Trump said he has made a lot of sacrifices. He doesn’t know what the word sacrifice means.