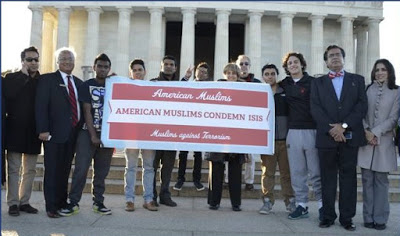 That was the emphasis in a recent discussion on “Effectively Countering Extremism: A Comprehensive Grassroots Approach,” hosted by the Religious Freedom Center at the Newseum in Washington, D.C.

American law enforcement officials and Muslims have been contending with the question of curbing extremism in their midst since the 9/11 terrorist attacks.

But the emergence of new terror groups, particularly ISIS in Syria and Iraq, which has also drawn vulnerable youth from several Western countries, including the United States, has further heightened the need for community engagement on the issue.

Dr. Baker, a top international expert, said addressing non-violent extremism is also important to prepare young people against extremist influences both offline and online. He said radicalization generally does not take place in mosques or schools but on the margins of society, where susceptible youth are told about jihadist ideology.

The community should call out any extremist elements they happen to know, he said. At the same time, Baker said that law enforcement officials should know that attempting to impose a particular brand of Islam does not work, and that community and the government officials should try to build a trusting relationship with individuals involved.

In his remarks, Dr. Tahir Wyatt expressed his concern about the frequent use of stereotypes about Muslims and pointed out that up to 90 percent of the victims of terror are Muslims. He said that the broader society needs to avoid spreading the perception that American Muslims are not concerned about radicalization, extremism and terrorism, since each time a terror attack takes place, it creates a negative impression about the American Muslim community and their faith. He argued that everyone has a duty to stop marginalization of a group of people.

Significantly, he noted that the American Muslim community currently lacks the ability both to engage with mainstream media and to inform the average American about the true teachings of Islam.

The discussion took place amid a new wave of terror attacks in geographically distant lands in South Asia and Europe. We at the American Muslim Institution are deeply conscious of the need to keep our homeland secure and safe.

While working as a proactive voice for American Muslims, AMI also believes in fair treatment of all communities in accordance with American ideals of equality and religious freedom. We also believe that stereotyping American Muslims is not only wrong, but against the spirit of the U.S. Constitution and it also fuels Islamophobia.

Countering violent extremism in America should be everyone’s business, and American Muslims along with others should do their part in making America safe and secure.