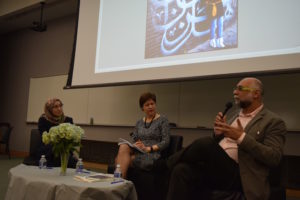 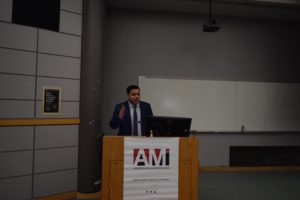 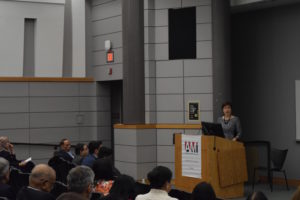 Panel discussion at George Washington University featuring Prof. Amir Hossain and Melissa Rogers on a discussion about Muslims, America and the First Amendment…

During summer 2010, I was sitting in a classroom at University of Virginia (UVA) to learn the First Amendment rights as part of the Study of the US Institutes (SUSI) Student Leaders exchange program. The students from three south Asian countries at the program were much enthralled contemplating the visionary promises outlined by the Founding Fathers of the United States. It was the first time I found how proud the American people are about their constitution. It sounded sacred “Congress shall make no law respecting an establishment of religion, or prohibiting the free exercise thereof; or abridging the freedom of speech, or of the press; or the right of the people peaceably to assemble, and to petition the government for a redress of grievances”.

Eight years later, on a March afternoon at Washington DC, I was not surprised seeing Muslim Americans invoking the constitution, with the same fervor. The striking point is, on the same day tens of thousands poured into the D.C downtown streets chanting ‘March for Life’; demanding Gun Control Laws to save children’s lives. One and half mile away from the protests, at George Washington University (GWU); a community of Muslim leaders, students and academics were at another soul-searching mission. Their discussion was ‘Muslims, America and the First Amendment’. The American Muslim Institution (AMI)’s executive Director Shahid Rahman, perhaps, set the motion saying – “History is being made everywhere”.

Before his inaugural notes, he introduced the Board members of the American Muslim Institution (AMI) amid applause from the audience.  “AMI’s mission is to be a pro-active voice for the Muslim Americans in the public sphere”, he asserted. In a brief, crisp presentation Mr. Shahid said American Muslims have a lot more to do as 66% percent Americans have never met a Muslim or almost 90% percent media coverage on Muslims are negative while hate crimes towards Muslims are on the rise.

“The highest number of Muslims in America are below 30 years of age.  They have always been looking for ways to make meaningful contributions. They look forward to what they can do as a fellow human being to their fellow Americans”, said Mr. Shahid.

Author and academic Dr. Amir Hussain of Loyola Marymount University; discussed in a broad detail on the contribution of Muslims in making America. Despite brief in every area yet he showcased iconic Muslim figures in art, media, culture, sports, movie or even structural engineering. Lives of the all-time great Muhammad Ali, Kareem Abdul Jabbar or architect of the then tallest building’s architect F R Khan were touched upon.

“History shows at least ten percent of the slaves who have built America were Muslims. At lower Manhattan, New York; slaves’ mass graves have been found.  There has never been an America without Islam”- said Mr. Amir while reflecting on his book Muslims and the Making of America.

Dr. Amir Hussain recited the famous poem I, Too by Langston Hughes “I, too, sing America…. I, too, am America”; and echoed that Muslims are America too.

Melissa Rogers, non-resident Senior Fellow on Governance Studies at Brookings Institution; reflected on the founding ideals of America and how religious freedom is embedded there. She quoted from the letters of George Washington – “For happily the Government of the United States gives to bigotry no sanction, to persecution no assistance, requires only that they who live under its protection should demean themselves as good citizens, in giving it on all occasions their effectual support”.

She went into details about how the Americans, of every faith and denominations, have been practicing religious freedom. She also referred that States make promises, however, those do not always align with practices.

“If Americans are unwilling to protect religious freedom, then we are being biased”; she remarked.

A question-answer session was followed by the discussion. Amira Baker, President of the GWU MSA; moderated the panel. A number of thought-provoking questions were raised from the audience. The panel was asked questions about removal of Muslim identity, how to inform Americans about Muslims, how the racial gap among Muslims could be addressed and so on.

AMI’s member of the Board of Directors Mr. Aquiliar Rahman asked the panel how the apparent tilt from the founding ideals of religious freedom has become possible. Melissa Rogers responded there might not be a very direct answer to the asking. “However, you always need to speak out and raise voice”.

About another question on how the hateful messages which have claimed to be under freedom of speech be addressed; Melissa said, “It shouldn’t go unchallenged. One couldn’t just walk away throwing hateful words”.

Shahid Rahman, concluded the session saying Muslims need to be more connected with their history in America and from the Ideals of the founding fathers. He also thanked the panelists and the distinguished audience.

The event sounds significant from a number of ways. When young Muslims have been soul-searching about their identities in America at the current climate or always bombarded with negativity about their faith, a pro-active group of Muslim leaders are taking on the stage. The most important thing is they are raising voice guaranteed by their constitutional freedoms. Instead of being self-alienated or forced alienated by hateful narratives; these Muslim communities are asserting their dignified American identities. They are calling for engagement in the public square, demonstrating a commitment to the founding ideals of the country and thereby disproving bigotry by constructive contributions in the face of adversities.