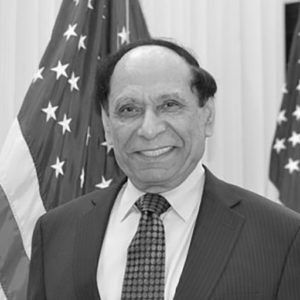 Ambassador Islam A. Siddiqui left the Obama Administration in February 2014 after serving for four years as Chief Agricultural Negotiator with the Office of the U.S. Trade Representative. He was responsible for bilateral and multilateral negotiations and policy coordination regarding agricultural trade, including the TTP, TTIP and WTO negotiations. In this capacity, Dr. Siddiqui played an active role in the successful 2013 WTO Ministerial meeting in Bali, Indonesia.

Between 1997 and 2001, Dr. Siddiqui served in the Clinton Administration in several capacities at the U.S. Department of Agriculture: as undersecretary for Marketing and Regulatory Programs; Senior Trade Advisor to Secretary Dan Glickman; and Deputy Undersecretary for Marketing and Regulatory Programs. As a result, he worked closely with the USTR and represented the USDA in bilateral, regional and multilateral agricultural trade negotiations. Before joining the USDA, Dr. Siddiqui spent 28 years with the California Department of Food and Agriculture.
Dr. Siddiqui was the first President and founding member of the United Muslims of America (UMA) in 1982. UMA and its sister organization, UMA Interfaith Initiative, continue to promote political and civic engagement and foster interfaith understanding in the San Francisco Bay Area to this day. In addition, he served as President and Board member of the Sacramento Muslim Mosque Association in the early 1990’s.

Currently, Ambassador Islam A. Siddiqui is serving as a Senior Adviser for Global Security at the Center for Strategic & International Studies (CSIS).  He earned M.S. and Ph.D. degrees in plant pathology, both from the University of Illinois at Champaign-Urbana. He received his B.S. (Hon’s) degree in plant protection from the G.B. Pant University of Agriculture & Technology, Pantnagar, India. In 2011, he was awarded the Doctor of Science (Honorary) Degree by his alma mater at Pantnagar. He can be reached by calling 202-725-7409 or by E-Mailing:iasiddiqui1@gmail.com