Contact: Mike Ghouse
(214) 325-1916 – text or talk
Mike@AmericanMuslimInstitution.org
www.AmericanMuslimInstitution.org
——–
American Muslims stand with the U.S. President on Countering radicalization of Muslims
Washington, D.C., December 7, 2015 – The San Bernardino mass shooting and the horrific loss of life and injuries last week have prompted serious soul searching among Muslims across the nation about the causes of home grown radicalization and how to counter it.
We stand with the President and his plans to eliminate the vicious ideology of Daesh, also known as ISIS.  “We agree with President Obama that ISIS does not speak for Islam, and American Muslims unequivocally reject ISIS’ hateful and misguided ideology” stated Ambassador Islam A. Siddiqui, President of American Muslim Institution.

While we mourn the deaths of fellow Americans in the 355 mass shootings this year, we particularly mourn the loss of life and resulting injuries in the San Bernardino mass shooting,  because a Muslim and his wife were responsible for the mass murder.

It is the responsibility of all Americans to help law enforcement officials in maintaining law and order and to assure the safety of every citizen. It is the duty of all of us to fight against radicalization through education and community engagement and work on promoting peace and harmony.  As American Muslims we have a greater responsibility in countering radicalization and violent extremism. 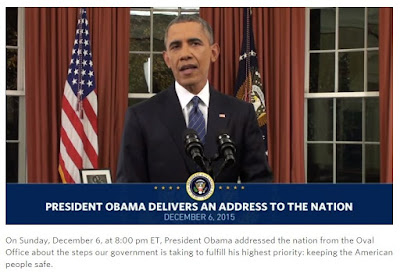