I am pleased to share Kaleem Kawaja’s article on the current situation.  He has captured the essence of dilemma.

“The average Americans do not argue that Islam is not a peaceful religion, but they argue that it is not enough to just quote scripture.  What is critical are the actions of Muslims.” And, “But the Muslim public relations exercises are often laced with such expressions borne out of the i 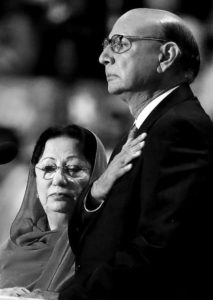 nsecurity of identity.  That increases the disconnect of Muslims from other Americans no matter how subtly. “

He talks about a strategy adopted by Khan, and that indeed has been our strategy – condemn the sin and not the sinner, it gives an opportunity to redeem the individual separating him from the sin of causing people apprehensive.

You may also want to read the article at Huffington post, where this strategy is applied and today on Hannity Radio, I talked about it. http://www.huffingtonpost.com/entry/ghazala-responds-to-trumps-half-ass-knowledge-about_us_579f7a4be4b004301c51a523?

Last week when Khizr Khan and his wife Ghazala Khan walked on to the stage of the Democratic party convention just a little before Hillary Clinton’s Presidential nomination acceptance speech, it was to defend the Muslim community from the onslaught of the anti-Muslim forces and especially the Trump Presidential  campaign. Having Lost their  son Captain Humayun Khan of the US Army in 2004 in the Iraq war they represented a bright example of an upright patriotic American who happened to be Muslim.  It was remarkable that not only Khizr Khan spoke well like a polished American professional, but also he neither sounded defensive nor aggressive nor he used any Islamic identity expressions.

The audience responded rapturously to Khizr Khan’s very controlled speech and especially when he invoked the US Constitution.  Indeed as he, an American Muslim, admonished Trump on his biases against  the beleaguered American Muslims, the audience, where only a miniscule number of people were Muslim, cheered him on and thereby the entire American Muslim community.  This was an absolutely galvanizing moment for the American nation, and as CNN headlined, the moment the American Muslims were waiting for.    .

In the last few years as terrorism and insane killings of civilians by Muslim terrorist groups first in Middle East and then in Africa and then in Europe and North America has mushroomed the stock of the global Muslim community has dipped a lot.  Even though those creating the mayhem and destruction are miniscule in size and the overwhelming number of Muslims are do-gooders, and indeed the wide majority of victims are Muslims themselves, the never ending cycle of terrorism committed every week by terrorists who happen to be Muslims has put a dark stain on every Muslim.

As the election year dawned in US, the mindless terrorism committed by what can only be called a counted few insane Muslims in Dallas, Philadelphia, San Bernardino, Orlando and other cities has cast only a dark patch on the 4 million strong American Muslim community throughout the nation.  It has provided much fodder to the racist and bigoted Islamophobes in many political circles.  Suddenly the adversaries of Muslims who had quietened a little with the passage of time after the 9/11 explosion, got a shot in the arm as many a media outlets grabbed those sensational headlines and laid it on the American Muslim community on a daily basis.

In this toxic environment many Islamic Centers and organizations who are relatively new and are still developing a public relations strategy for the community are simply flabbergasted.  They are much unprepared to deal with the daily onslaught of bad news. Many of them fall back on being defensive and on repeatedly using the Islamic religious jargon to explain that Islam is a constructive religion of peace and coexistence with others. However with their best efforts the drumroll of terrorism perpetrated by a few rogue Muslims across the globe, only very few non-Muslims are getting convinced.

Republican Presidential nominee Donald Trump’s campaign has exploited the bad news to the hilt.  The only explanations from Muslim groups have been to quote from Islamic scriptures on how much Islam condemns terrorism and violence.  The average Americans do not argue that Islam is not a peaceful religion, but they argue that it is not enough to just quote scripture.  What is critical are the actions of Muslims.   Even the educated Muslims and their national organizations like ISNA, ICNA, CAIR  in their public relations efforts often use quotes from the scriptures to buttress their point and are defensive.

But America is a nation where religious idioms and discourse are rarely used in public relations exercises and the use of religion is largely a private matter.  Thus the explanations of the Muslim groups quoting the scripture and the prophet mostly bypasses the ears of the American people.  The adversaries of Muslims have succeeded in their propaganda that American Muslims are a bit too much religion oriented and not like the rest of Americans who can separate the religious and the temporal.  This disconnect has continued

After all in the offices and workplaces in America where Muslims work they do not use religious idioms like Salam Allium, inshallah, alhamdulilah, bismillah  in conversation or meetings.  But the Muslim public relations exercises are often laced with such expressions borne out of the insecurity of identity.    That increases the disconnect of Muslims from other Americans no matter how subtly.

Khizr Khan’s brave effort to adopt a different public relations idiom has succeeded very well in the short time.  Most mainstream media outlets applauded his presentation and found fault with Trump when he tried to clumsily respond to Khan and his wife.  Indeed most prominent Republican leaders including Senate majority leader Mitch McConnell, House Speaker Paul Ryan, senior leaders like John McCain and Lindsey Graham  and others have supported Khizr Kan’s point and have blasted Trump for his lame negative comments on the Khan couple, the day after their speech and media interview.

Today the American Muslims and their organizations have much to learn from the very successful strategy that Khan adopted .  They should study Khan’s technique and adopt his strategy as their own.  Especially in the next 3 months of the election campaign Muslims can make much inroads into the American mind and reverse the backlash that they have been facing for a couple of years now.  For sure it is a strategy for the significant redemption of the American Muslim community.

The writer is a community activist in Washington DC.  H can be reached on: kaleemkawaja@gmail.com