American Muslim Institution condemns Paris Terror attacks.
Washington, DC, November 13, 2015 – It has been a difficult evening for the entire humanity to watch terrorists barge in places and shoot people randomly. Over a hundred people have become the victims of terror and another hundred are wounded.
While the French authorities have not formally ascribed responsibility for this act of terror to any particular group – it appears to have been committed by Islamist extremists. Regardless of the religious affiliation the perpetrators may claim, we strongly condemn this heinous terrorist crime.

We applaud the French Police for doing their best to cut down on the loss of innocent lives and finally removing the immediate threat to lives. We stand with the people and Government of France as they deal with this tragic event and bring the people behind this terrorist act to account.
Our thoughts and prayers go out for the victims and their surviving relatives. May God give them immense patience to cope with this tragedy.
As Muslims, we are deeply offended and condemn this act of terrorism against innocent people; they have violated every societal norm as well as the rules laid by the very faith they claim to belong. This is not the act of a Muslim, but of rogues who claim to follow the faith. Quran 5:32 say, “If anyone slays a person, it would be as if he slew the whole people: and if any one saved a life, it would be as if he saved the life of the whole people.”
We have to tackle this issue head on, and cut the roots of extremism, while we are doing that, prayers and a candle vigil gives us some coherence. The children need to be with us to reassure them that God is a higher power and it gives hope and relief to all of us.
Lighting a candle is telling ourselves that we have taken the first smallest step that we can actually take, and hope and pray to find larger solutions. 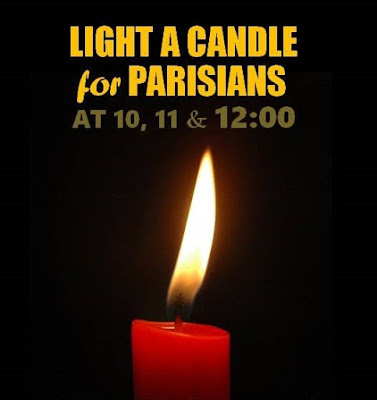 Please light a candle wherever you  are to show our support to the people of France.
# # #