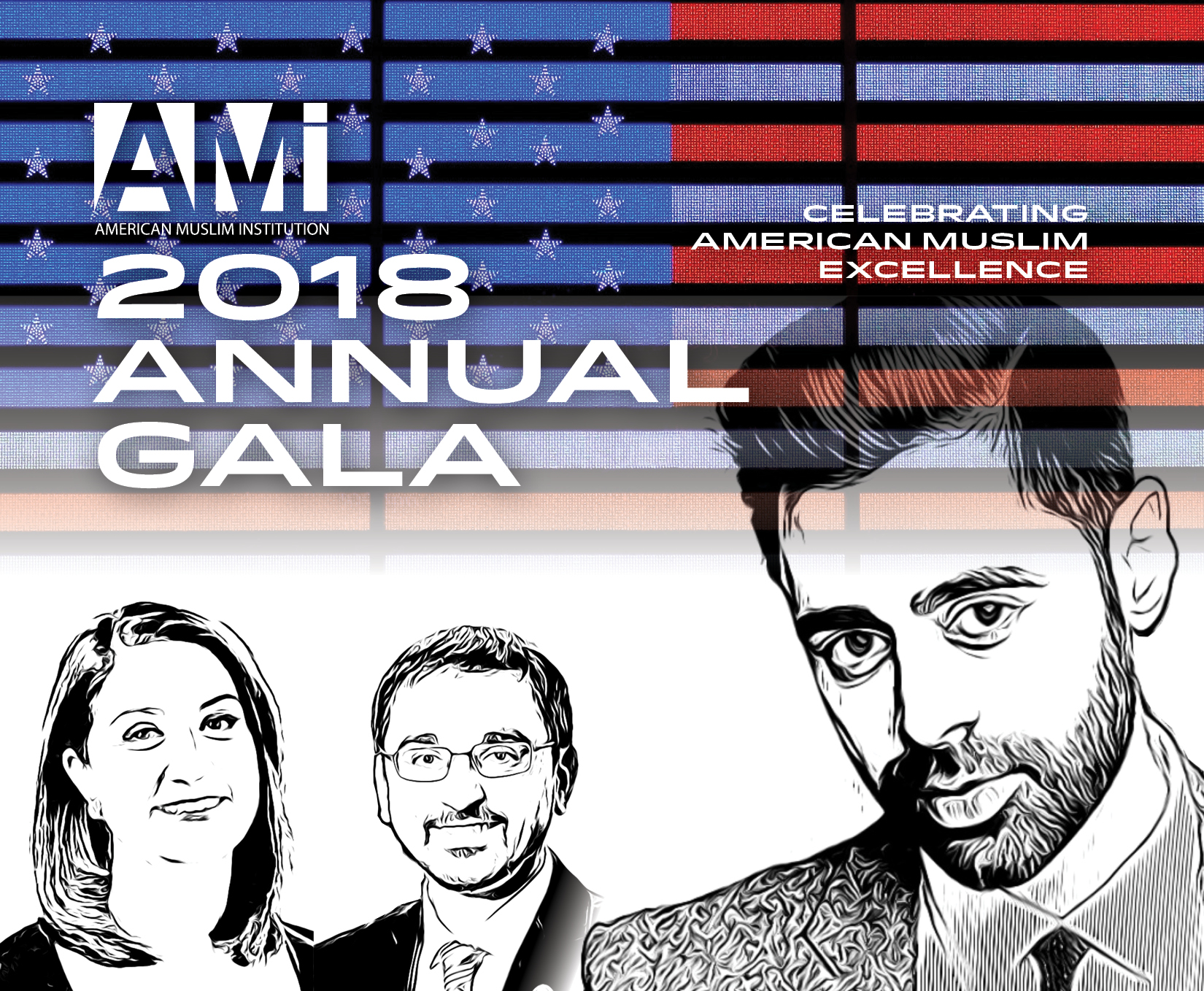 AMI hosted its 2018 Annual Gala Dinner at the Crystal Gateway Marriott in Arlington, Virginia on December 8, keynoted by comedian Hasan Minhaj, journalist Amna Nawaz and Virginia Secretary of Education Atif Qarni.  The hall was filled to capacity with about 350 people in attendance.  The aim of the evening was to celebrate American Muslim Excellence and to raise finds to support AMI’s programs in 2019.

Mistress of Ceremonies, local news anchor Tasmin Mahfuz welcomed guests and invited AMI President Ambassador Islam Siddiqui to welcome the guests and to recognize key dignitaries and institutions in attendance.  He also led the audience to observe a moment of silence to honor the late Mrs. Rukhsana Rahman, the wife of AMI’s Board Chairman Dr. Aquilur Rahman.

The night began with AMI board member Dr. Ishrat Husain presenting an excellence award to VA. Ed Sec. Atif Qarni for his role in fostering civic engagement in the Commonwealth of Virginia and the American Muslim community.  AMI was pleased to recognize him for being the first Muslim to be appointed in a state cabinet position in America.

Executive Director Shahid Rahman painted an optimistic view of being an American Muslim in 2018 and highlighted the contributions of individual Muslims.  He further explained, the challenge facing the American Muslim community lies in the fact not enough American Muslims are sharing their narrative.  In order to reclaim the American Muslim narrative, Mr. Rahman suggested Muslims begin empowering the next generation by starting a fellowship program.  In addition, he mentioned another major priority of AMI is to increase the amount of people trained in media engagement from 75 in 2018 to 150 in 2019.  AMI is confident more individuals will enter the public sphere to make their voices known to those who know little about Islam or Muslims.

Dr. Bobby McKenzie of New America then presented the findings of the joint AMI-New America study looking at the perception of American Muslims in the U.S. and how it compares to the DMV region.  Dr. McKenzie provided the audience with some sobering information, demonstrating majority of Americans in the DMV region claim not to know a Muslim and the importance of the American Muslim community to work together to get their message out.

Journalist Amna Nawaz of PBS was presented an excellence award for her work in media and journalism by Dr. Yakub Mirza.  She spoke at length about giving young women choice in all matter related to career and faith.  She also spoke about the importance of having role models and being there for young women as a role model.

Hasan Minhaj joined Amna Nawaz on stage to have an armchair dialogue speaking about his career and the challenges he faced as a minority attempting to enter the entertainment industry.  He offered important words of wisdom to the young people in audience, encouraging them to follow their dreams and keep working and eventually there would be a big break!  Amb. Siddiqui presented Hasan Minhaj an excellence award for his work in comedy and media.

Ambassador Islam Siddiqui, Tasmin Mahfuz and Waleed Gabr of Islamic Relief provided a stirring endorsement of AMI’s cause, while leading the evening’s fundraiser.  They encouraged everyone to support the cause, which would have a great impact in the lives of Muslims living in the United States.  With the support and dedication of the community, AMI raised over $93,000 to support its multifaceted programs in 2019.