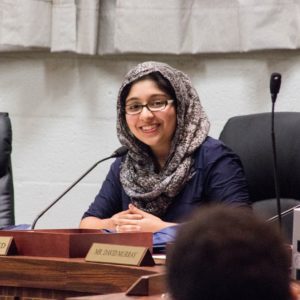 Raaheela Ahmed is the elected representative for the Prince George’s County Board of Education, District 5, representing over 80,000 people in the Bowie, Upper Marlboro and Mitchellville areas in Maryland. This lifelong Prince Georgian and product of Prince George’s County Public Schools (PGCPS) was elected to office in November 2016 with 57% of the vote from 32,000 supporters. She first ran for the position in 2012 as an 18-year old….and nearly won. Over the course of her two campaigns, Raaheela went door-to-door to over 12,000 homes and attended dozens of community events to better understand the needs of her community. As a board member, Raaheela has been a vocal and active advocate for the community. She’s zipped around the district to attend 250+ meetings and events in her first year on the board, and doesn’t plan to slow down anytime soon! Inherently, grassroots, service-based leadership is what she’s all about.

Outside of the board, Raaheela serves as the Manager of Leadership Programs for New American Leaders, where she’s developing a national network of elected officials of immigrant background that are committed to an inclusive democracy.

As a young, first generation American, head-covering Muslim woman of Indian and Pakistani descent, Raaheela has broken stereotypes and expectations across the board of what it means to be a service leader. For more information, or to contact Raaheela, visit www.raaheela.com.