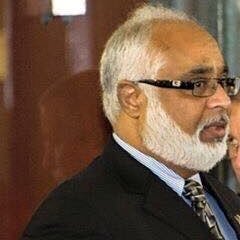 Rafi Uddin Ahmed began his long and illustrious career in public service by working with his local masjid, the Muslim Association of Virginia in the year 1999. He began with the position of Chairman of Function and Seminar. Once MAV outgrew their first Masjid, Dar As Salaam, he was placed in charge of the Construction Committee tasked with building Dar Al-Noor. Dar Al-Noor’s construction was completed under his presidency. Since his first term in 2003, he has been reelected as president for 4 non- consecutive terms. Additionally, he has served as Chairman of the Board for one term.
Under his leadership, the masjid became more politically involved by engaging in voter registrations at the masjid, Get Out to Vote (GOTV), and Candidate Nights. Candidate Nights were pre-election debates between candidates for school board, county, state, and federal elections. The focus of these events were to fight islamophobia by engaging politicians on all levels.
Rafi was also the Chairman of the Public Affairs and Civic Engagement (PACE) Committee, which was created under his leadership. PACE created programs to educate politicians from all parties, with a focus on Republican and Tea Party members. These programs were symposiums and seminars about hot button issues such as Jihad, sharia law, and women’s rights in Islam attend by politicians, school board members, teachers and principals. PACE also began the Muslim Lobby Day in 2012 in the Virginia state government that continues until today. Through all the years of effort, 10-13% of all registered voters in Prince William County are Muslim. 18% of all active voters in Prince William County are Muslim. In addition to increased voter numbers, both Democratic and Republican candidates seek Muslim support.
Rafi lead PACE in the creation of the Virginia Muslim Advancement Committee (VMAC) which worked with most Masajid in Northern Virginia. This Committee recognized qualified individuals within the Muslim community for appointment. They then engaged the Virginia Secretary of State to get Muslims appointed to various committees, boards, and commissions on state and county levels.
Rafi also represented MAV on the American Muslim Sikh and Arab Advisory Committee (AMSAAC). This committee held regular meetings with the Deputy Director of the FBI to discuss issues affecting their respective communities; Rafi represented the Muslim community. One of the accomplishments of this committee was to update FBI trainings to reflect accurate information about Islam and increase sensitivity towards Muslim issues.
While continuing his duties with MAV, Rafi Ahmed began working with other organizations. From 2006 to 2009, Rafi held the position of Vice Chairman of the Coordinating Council of Muslim Organizations of Greater Washington DC (CCMO). This was an umbrella organization for more than 80 organizations active in Muslim affairs.
Established in 1989, the All Muslim Association of America (AMAA) manages different Muslim cemeteries located in Northern Virginia. In 2009, Rafi joined and has
been an integral part of their operations ever since. Since joining, Rafi helped strengthen the organization by updating and implementing by-laws, creating organizational structure, and created policies and procedures. He served as President, and currently serves as a board member. When Rafi joined AMAA, their net worth was approximately $1 million. In 2019, their current net worth is $5 million.
Rafi served as board member in 2017 and eventually Chairman of the Board from 2018 to 2019 of Muslim American Citizens Council and Public Affairs Committee (MACCPAC). This organization hosted iftars on Capitol Hill, held White House briefings, and held meetings with the Department of Homeland Security and the Transportation Safety Administration regarding the increased number of prominent Muslims on the no-fly list.
In 2017, Rafi was a founding member of Virginia Council of Muslim Organizations (VCMO). This is an umbrella organization for 10 Islamic centers all over Northern Virginia including Dar al Noor, Dar al Hijrah, ADAMS Center, Mustafa Center, Islamic Center of Northern Virginia Trust, Muslim American Society DC, AMAA, and others. He currently serves as Chairman of the Board.
Since 2016 Rafi has been working with Sound Vision on a volunteer basis; he consults/ organizes to lobby for humanitarian crises such as the Rohingya, Uyghur and Kashmir issues. He lobbied on Capitol Hill and participated in rallies to bring awareness. During the Sound Vision 2020 Thinking Retreat for Swing States, Rafi presented to key Muslim leadership from several states on how to engage in grassroots politics.