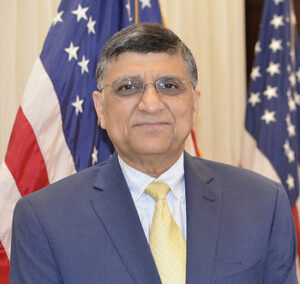 Qaisar Shareef concluded a nearly 30-year career with Procter & Gamble in 2011. He joined the company in 1981 in Cincinnati, Ohio and served in several roles within the US and in P&G’s international operations in Marketing and in General Management. Most recently, he headed up the P&G operations in Pakistan; a role in which he served until early 2011, before returning back to the US. He is based in the Washington DC area. He is an advisory partner to Ward Howell International, a global executive recruiting and management consultancy firm. He also teaches as adjunct faculty in the MBA program, George Washington University, Department of International Business.

During his time at P&G Pakistan, Qaisar worked closely with several non-profit organizations engaged in providing education to the under privileged and in disaster relief. He is presently serving on the board of HOPE USA, and Executive Committee of US Pakistan Foundation. He is also on the Board of OPEN DC, organization of Pakistani entrepreneurs. He is serving on the board of Transparent Hands, a crowd funding platform that assists the underprivileged in covering health care costs. Earlier this year he was elected president of Montgomery County Muslim Council.

Qaisar is originally from Pakistan and first moved to Cincinnati in 1977. He has a Bachelor of Science degree in management from the Middle East Technical University, Ankara, Turkey, and an MBA from the University of Cincinnati, in Ohio.